skip to main | skip to sidebar

Finally a couple of hours in the garage

The gearbox went back in place. Everything's painted and new rubber boots in place. Still to do at the rear end is to install the brakes and supports for the air ride system.

Got almost all panels now

The only one missing is the duck pond behind the rear seat.
Start working on the car tomorrow. 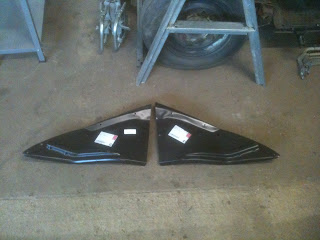 Went out to the garage last Saturday. Had to build some stands to support the body while replacing the heater channels.

Some small work left on the chassis

Got new tie rods, bearings and boots for the transmission. Just som lowering left to do to call the chassis done.
Will see if the link pins needs to be fixed. Theres a slight play in them but it might go away after a round with the grease gun.

Two of our former garage mates moved out so we rearranged a few things. My car was moved to the opposite side.
Will start to work on it any day now since the work on the house is finally almost done.

Got a new split roof piece

I recently got a split front roof piece from Gurra. I have a roof with a three-fold sunroof and a split dash with the a-pillars cut of in the middle. The original plan was to merge the pillars like you would on a roof chop.
.
The new roof piece will hopefully make the split conversion easier as the pillars are cut down by the dash. Another bonus is that it has the "hammer dent" unique to the split. The three-fold roof came from an early oval so it didn't have this dent.
.
Rust sucks. I want to start on split conversion.
Upplagd av Balocco kl. 23:27 Inga kommentarer:

A picture of the new 62-pan

Here's a pic of the 62-pan that I'm going to use.
A fresh coat of POR15 on the flipside. I painted the other side a few days later. 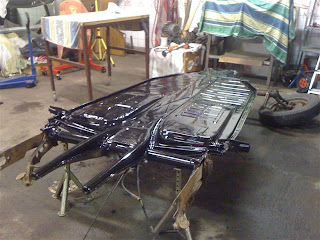